Menu
Back to the previous page

The 5th study on the European hotel distribution market, conducted by HOTREC (European umbrella association of hotels, restaurants and cafés) and the Institute of Tourism at the HES-SO Valais-Wallis, is published today. The results are based on observations from nearly 3900 hotels across Europe, collected between January and April 2022 and with reference to the year 2021 (pandemic year).

Evolutions in the hotel distribution market between 2013 and 2021

HOTREC's distribution study shows that between 2013 and 2021, the market shares of OTAs have steadily increased in the European hotel sector from 19.7% in 2013 to 29.2% in 2019 (weighted results including data from hotel chains). At the same time, the share of direct bookings has decreased across Europe by over 10-percentage points from 57.6% in 2013 to 47% in 2019. The results for 2021 show that hotels' reliance on OTAs remained almost at the same level as 2019 during the pandemic episode, while direct bookings increased significantly. According to the study, the share of OTAs in 2021 was 28.8% while direct bookings increased to 55.2% (+ 8% over 2019).

Two players, Booking Holding and to a minor extent Expedia Group, dominate the OTA market, with an aggregated share of nearly 84%. Booking Holding is by far the most influential player. Its dominance has raised over the last 8 years by more than 11%, from 60% in 2013 to 71.2% market share in 2021. During the pandemic, Expedia has seen a decrease in its share, which can be explained by a presence mainly in luxury and business hotels in major cities.

Regarding some aspects of the relations with OTAs, most hoteliers (55%) feel pressured to accept platforms terms and conditions (e.g. regarding cancellation policy, special discounts) that hotels would otherwise voluntarily not offer. As expected, the higher the volumes of room nights generated by OTAs in a hotel, the higher the perceived pressure. The standard commission rate stayed the same for nearly 71% of respondents, but for a significant part of the hotels, 26%, the commission rate increased.

Compared to 2013, the use of channel managers has increased slightly from 39% to 47% and the proportion of hotels managing rates and availability manually has decreased from 56% to 37% in 2021. In 2021 roughly 80% of respondents in the survey are aware of the integration options with travel meta-search engines and this distribution channel is used by 41% of hotels. In 2021, Hotel Ads by Google is the market leader (73%) followed by TripAdvisor (57%) and Trivago (44%). Back in 2013, TripAdvisor was the dominant meta-search platform with a usage share of 71%. 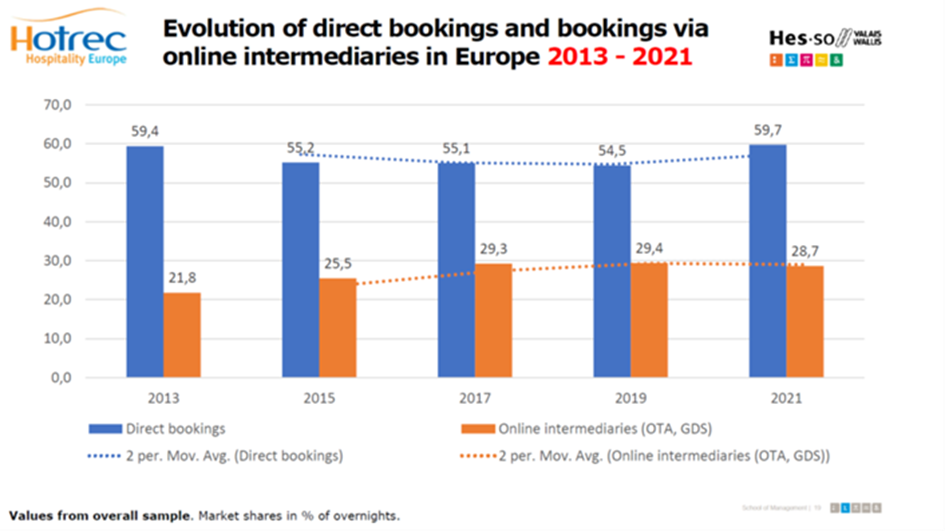 This series of study, under the supervision of Prof. Roland Schegg, began in 2014 and its objective is to monitor the evolution of distribution channels within the European hotels industry with a specific focus on the role of online travel agencies (OTA). The present study allows therefore to illustrate the evolution of distribution channels and players for the pre-pandemic years 2013, 2015, 2017 and 2019 as well as for the pandemic year 2021. You can download the entire 2022 study using the link hereunder.